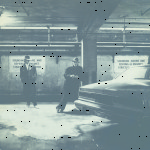 Less is More and Some More    Featuring the original and previously unreleased mixes of the 1989 album Less is More, The 1987 Good Earth EP and singles Young Republicans in Love and Ode to the New Year and some other tracks recorded in the intervening period. 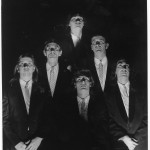 Mess is Law and the Lost Tapes  The last album made by The AM Band before the group split in 1992.  This reissue also includes  tracks previously thought to have disappeared into the void. Recently unearthed they were recorded after the last album was made. This re-issue also includes tracks from the BBC Marleybone Studios  recorded on the Mary Costello Show for BBC Greater London Radio (London Live) and some tracks taken from Andy’s First post AM Band project Comedy Without the Humour.  “This is performance orientated, good time music” Making Music 1991

A Christmas Soul  Following a gig to mark the band’s 20th anniversary. Andy, Austen, John, Neil and Steve came together to record their first album since 1991.  Co-opting the wonderful Derrick Macintyre on bass this is an album of Two halves.  The first Eight tracks feature guest vocalists including a pre X factor Alex Bell (A.K.A. Alexander Burke) Funky house diva Angie Brown, Vanessa Haynes and manymore singing souly takes on well known Christmas tunes.  The rest of the album is made up of tracks written by Andy for his 1990 audio play “A Global Carol” Based VERY! Loosely on the Charles Dickens classic “A Christmas Carol”

Recorded in 2007 and launched in 2008 this album was recorded to raise money and awareness for the Lowe Syndrome Trust.   CD and download proceeds are donated to the charity.

Prior to gaining her notoriety in Big Brother BB Sedikki recorded Practical Girl a semi autobiographical concept album following her through the trials and tribulations of a complicated love affair.
On coming out the house she recorded her version of Brass in Pocket which has been included in this Remixed and re-mastered version of the album.